Australia's New Espionage Laws: Another Case of Hyper-Legislation and Over-Criminalisation 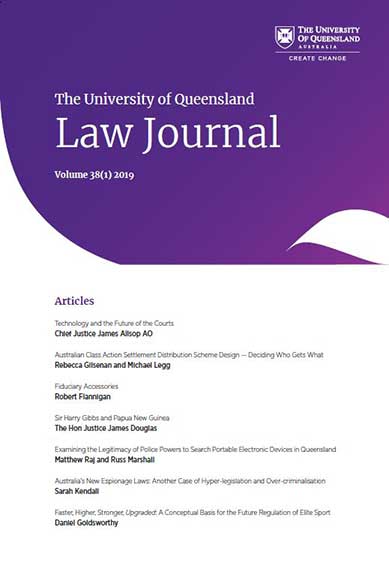 Australia introduced its first espionage offence in 1914. This was repealed in 2002 and replaced with four new offences. Just 16 years later, these offences have again been the subject of legislative change; in June 2018, they were repealed and replaced with 27 new offences. Justifications for the introduction of both the 2002 and 2018 offences were on the grounds that existing offences (relevantly the original 1914 offence or the 2002 offenses) failed to capture modern espionage practices, deter espionage activity and secure convictions. Examination of the original and 2002 offences demonstrated that, in these respects, those offences failed to address espionage used today. The 2018 offences, however, remedy that failure and are therefore necessary to effectively address espionage used in today’s world. Despite this, the broad nature of conduct criminalised by some of the offences raises concerns over criminalisation of conduct that may have an innocent explanation. Further concerns arise over the number and overlapping nature of the new offences. Discussion of these issues may provide useful insights for movements toward law reform in the United Kingdom and other Five Eyes nations.